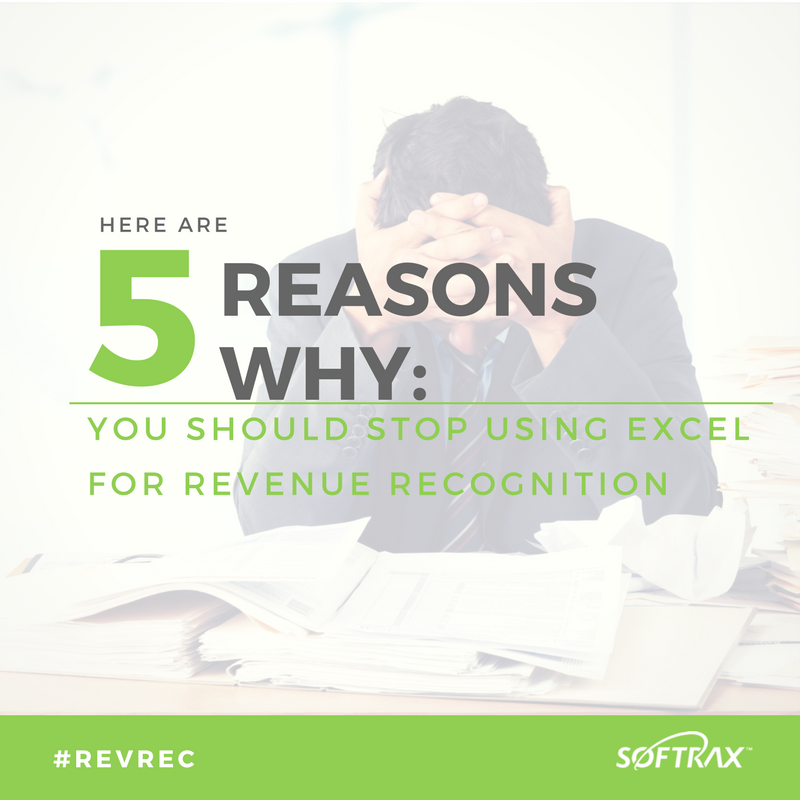 In January, we posted a blog outlining five important reasons why excel spreadsheets were not to be trusted for implementation of the ASC 606 guidelines. Today, we’ll expand on the first point, “Excel is error-prone”.

The reality is, spreadsheets are extremely error-prone. Human interaction and involvement increases the risk of spreadsheet failure tenfold. If the studies are true and at least one in every hundred cells contains an error, think of how many errors are out there right now, wreaking havoc on financial systems. Major losses have been incurred due to spreadsheet inaccuracy:

Excel Errors over the years –

TransAlta Corp. (2003)
TransAlta overpaid for contracts that resulted in a $24million loss, when the company was planning to report a per-share profit over $1. The president at the time, Steve Snyder, said, “It was literally a cut and paste error in an Excel spreadsheet that we did no detect when we did our final sorting and ranking of bids prior to submission.”
Barclays Lehman Brothers Asset Acquisition (2008)
Barclays acquired 179 trading positions by accident when their Excel spreadsheet was reformatted by an associate. A first-year law associate was brought in after-hours and asked to reformat the list of contracts Barclays was to acquire after Lehman Brothers declared bankruptcy. When the sale closed a few days later, Barclays was forced to take the losses on an additional 179 contracts that were not meant to be included.
Harvard’s Reinhart-Rogoff Economics Paper (2010)
Economists Carmen Reinhart and Kenneth Rogoff published a ground-breaking paper that supported major budget cuts and unemployment after the financial crisis. However, their Excel spreadsheet was proven to include several coding errors that challenged the validity of their research.
JP Morgan’s “London Whale” (2012)
JP Morgan admitted that a very standard Excel mistake lended itself to their $6billion trading loss. On the last few pages of their report on the loss, they describe the error in their Value at Risk (VaR) model as, “Specifically,…the spreadsheet divided by their sum instead of their average, as the modeler has intended… It also remains unclear when this error was introduced in the calculation.”
Utah State’s Office of Education (2012)
The Utah State Office of Education found a miscalculation in funding that cause the state’s education budget to be short by $25 million. The Desert News, Utah, reported that a faulty data entry in a spreadsheet used to calculate “pupil units” caused the miscalculation. As a result, the associate superintendent and director of school finance submitted their resignations.

The list goes on. And although many of the stories mentioned above extend beyond the revenue management ecosystem, they bring to light a crucial point: spreadsheet mistakes, no matter how small, may ultimately affect shareholders in a big way.

“Excel just wasn’t designed to do some of the heavy lifting that companies need to do in finance”, Paul Hammerman, a business applications analyst at Forrester Research Inc. recently told the Wall Street Journal. Revenue Managers have much more important decisions to make, and they shouldn’t be dealing with these Excel manual lifts. Adobe’s finance chief, Mark Garrett would agree, quoting to the WSJ, “I don’t want financial planning people spending their time importing and exporting and manipulating data, I want them to focus on what is the data telling us.” He is working on cutting Excel out of this process, he said.

Accounting and advisory firms are also urging revenue managers currently reporting in compliance with or implementing the new FASB/IASB Standard ASC 606/IFRS 15 to solely rely on spreadsheets as a backup. The more complex the revenue recognition scenarios, the more cumbersome and time-consuming spreadsheets become, and the higher the risk for error becomes.

Don’t be intimidated by the thought of transitioning your revenue management system out of spreadsheets. Implementing revenue software doesn’t have to be a lengthy or painful process. With quick installs and full compliance with the guidance, Revenue Manager’s benefits greatly outweigh the risks associated with spreadsheet errors.

For more information on our Revenue Recognition software, please reach out to a Softrax representative at (972) 715-4028 or sales@softrax.com.